Here is the most comoun scenario:

FlashEff is a basically built up from 3 major pieces: 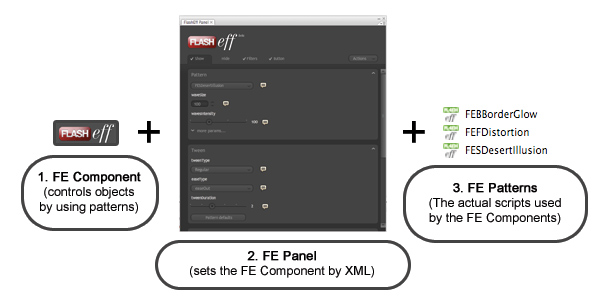 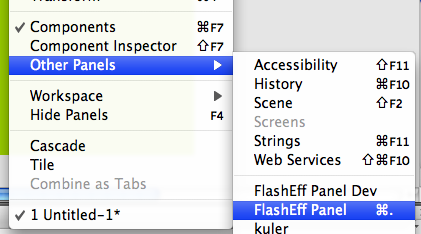 Here is how it works:

1. First, drag an instance of FlashEff Component to the stage, and drop it over the desired object (movieclip, sprite or dynamic text)

2. Then, open the panel from Window > Other Panels > FlashEff Panel (and log in with your JumpeyeComponents.com account)

4. From within the FlashEff Panel select the type of animation, filter or button transition/script you want to use.

5. For customization, scroll down each tab content and change the settings.

6. For each animation, filter or button, a FE Pattern is automatically imported.

7. After playing up with more patterns, you’ll notice that they all are imported within your project library. If you want to get rid of those that are not used anymore, choose Actions > Optimize.

8. To copy/paste settings to another object, use Actions > Copy and then Actions > Paste 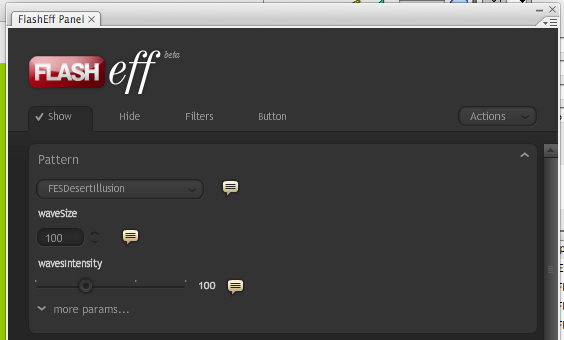 FlashEff uses scripts to generate all kind of animations based on the user setting. These scripts are saved individually within the FlashEff framework as SWC files/components and they are called "FlashEff Patterns". Whenever you use a FE Pattern, it has to be imported (automatically) within your library (the imported SWC resides in the Flash project library and is not imported as a separate AS file)

Check out these free, fully functional AS3.0 Flash components by Jumpeye:

FlashEff 2.0 Free
(free for non-commercial use)

JC Panorama
(free for non-commercial use)

JC Player
(free for non-commercial use)